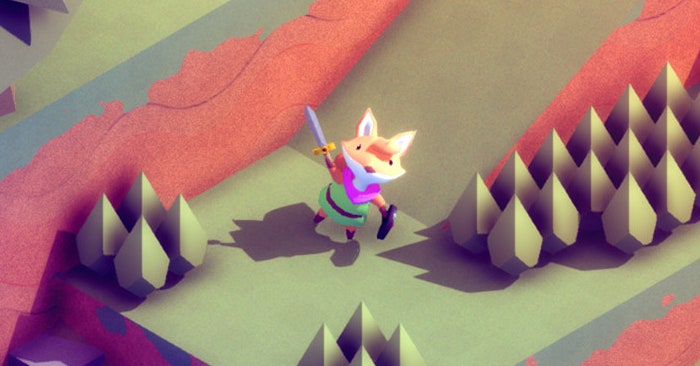 an indie video game published by Finji, Tunic pulls from the Zelda and Souls series in a reverent manner that feels both cohesive and transformative. After playing it, I’m convinced the game is a masterpiece worth celebrating, a small gem strewn among the heap of blockbuster releases in 2022. You play as a cartoon fox who is stranded on an island with lethal monsters and must uncover intricate secrets hidden in plain sight.

Your adventure begins on the beach, and disparate environments lie ahead through a forest. In a quarry, players battle animals wearing gas masks to traverse further beneath the surface, soaked in the fuchsia glow of oversize crystal formations, and on the mountain, you zip past crumbling architecture blanketed in snow as you search for a way to the top.

The game was primarily created by Andrew Shouldice. Before Tunic, he worked at a Canadian publisher, Silverback, which specialized in puzzle games. During an interview on the Waypoint Radio podcast, the developer spoke about early iterations of the game and its core. “One of the things that ends up being a very important part of Tunic’s design is being able to slip behind corners and explore in places where it feels like you’re not supposed to be,” Shouldice said.

The game’s art design is enchanting; colors are saturated like a crisp dream. The ethereal, synth-laden soundtrack gently elevates the experience and soothes when appropriate; all 60 tracks are purchasable on Bandcamp. Tunic’s isometric perspective is central to its construction, and curious players are often rewarded. As you scour the island picking up stronger weapons, unlocking chests, and forging pathways, you also collect cryptic pages of a guidebook. Although it is only partially in English, the guidebook is filled with maps, hints, and strategies essential for excelling at Tunic.

The more I paid attention to the guidebook and sought additional pages, the more fun I had with Tunic. Enigmatic dungeons are littered with spiky traps, piercing lasers, and criss-crossing paths that lead to unexpected places. Consulting the detailed maps helped me stumble through the darkness. Harking back to the golden age of physical releases, the pages would look wonderful in print and have a surprising tactile sense despite their digital nature.

Compared to the other game I’m playing right now, Elden Ring, the combat in Tunic is more accessible and avoidable. Anytime a boss or cadre of monsters proves too difficult, you have the choice to go into Settings, click Options, then Accessibility, and turn on No Fail Mode. The puzzles and world exploration may still prove challenging, but the fighting is less of a barrier to entry. Tunic even prioritizes deftness over brute force with a secret ending.