Chernobyl Was a Wildlife Haven. Then Russian Troops Arrived 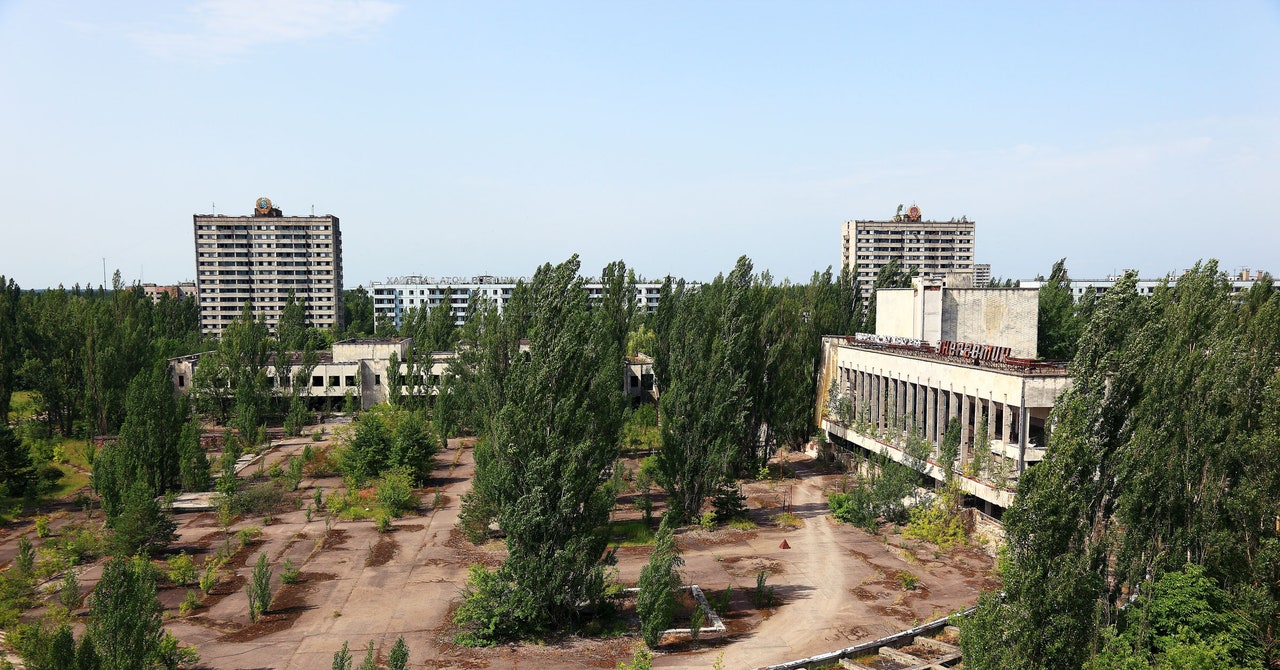 Germán Orizaola was standing in the shadow of Chernobyl Power Plant’s reactor Number Four—the epicenter of the worst nuclear accident ever. It was the spring of 2016 and the giant dome of steel and plastic that now covers the destroyed reactor was not yet in place. From 400 meters away, he could see the decaying concrete sarcophagus that had been hastily constructed over the ruined building in the months after the 1986 disaster. In the middle of the night, the somber edifice glittered with lights.

But it was what was happening at his feet that really captured Orizaola’s attention. The pond he was wading in was bursting with activity. Orizaola had come to the Chernobyl Exclusion Zone to collect tree frogs and find out whether living in the shadow of disaster had a lasting effect on the creatures’ genetics. While planning the trip, he’d heard other researchers talk about the zone as if it was an apocalyptic wasteland. The situation in front of him told the opposite story: Every amphibian he’d come to collect was right there. And in the surrounding forest there were moose, deer, foxes, raccoon dogs—all kinds of mammals. “As soon as you arrive, then you see that it’s completely full of life,” says Orizaola, a zoologist at the Universidad de Oviedo in Spain.

Over the intervening years, Orizaola returned to the Exclusion Zone four times and published multiple studies based on his research at the site. He was in the middle of planning his next trip when the Russian invasion turned the area around Chernobyl into a war zone. On February 24, Russian troops entered the Exclusion Zone from bordering Belarus. By the end of the day, they had taken control of the nuclear power plant, trapping more than 100 employees there. Workers at the site told Reuters that Russian soldiers drove armored vehicles through the Red Forest—one of the most contaminated parts of the Exclusion Zone—kicking up clouds of radioactive dust. Over the following weeks, experts grew concerned that without proper cooling, spent nuclear fuel still stored at the site could overheat—and indeed the facility lost power for more than a day.

On March 31, Ukraine’s state nuclear company, Energoatom, said that Russian troops had left the power plant, according to a report by the BBC. Until scientists can return to the area, the effect the invasion has had on the Exclusion Zone is still unknown. The forests surrounding Chernobyl are one of the most important places on earth for observing the effects of radiation—and a surprising rewilding success story—but now the land may be embroiled in a second disaster. Meanwhile, many of the research teams experienced in studying this area have been scattered, or their work delayed indefinitely.

Several of the Ukrainian researchers Orizaola used to work with are trapped in Kharkiv, a northeastern city that has seen some of the most devastating air strikes from Russian forces. Only a few weeks before the attack, Orizaola was talking with one researcher about his upcoming trip. “Now he has moved from talking with me to making Molotov cocktails and spending the nights in the shelters,” says Orizaola, who has remained in sporadic contact with his Ukrainian colleagues via email and Facebook Messenger. Another Ukrainian scientist who manages research in the Exclusion Zone was trapped in a town called Slavutych just outside the zone that was captured by Russian troops before mass protests forced the Russians to withdraw and an agreement was struck that residents would hand over their arms to the mayor.

During the Russian occupation, most research in Chernobyl ground to a halt. The Chernobyl Exclusion Zone was created shortly after the nuclear disaster and now covers 2,8000 square kilometers in northern Ukraine, making it the third-largest nature reserve in mainland Europe. The abandoned area extends north into Belarus, which has a separately managed Exclusion Zone called the Polesie State Radiological Reserve. For more than 30 years, the area has been mostly deserted, save for the workers tasked with decommissioning the power plant safely and a rotating cast of researchers who come to study how nature responds to nuclear disasters.

Ecological monitoring studies within the Exclusion Zone are coordinated by the Ukrainian International Radioecology Laboratory, which is headquartered in nearby Slavutych. On March 14, its official Twitter page directed followers to a group called #ScienceForUkraine—a network of volunteers providing support to Ukrainian scientists and students. The Twitter account has also retweeted messages of support from other academics with links to Chernobyl.

Jim Smith, a professor of environmental science at the University of Portsmouth, UK, has been visiting the areas around Chernobyl since 1994. The most remarkable thing about the Exclusion Zone, he says, is how quickly nature rebounded after the site was abandoned by people. “I think the chronic radiation we see now at Chernobyl is probably causing some subtle effects that we can maybe see, but it isn’t causing big ecosystem effects,” Smith says. In the wake of the disaster, animals flooded back into the nearby forests. It’s now home to Eurasian lynx, brown bears, and black storks. In the mid-2010s, camera traps spotted the first European bison in the area for 300 years—a lone male that is thought to have migrated to the area after bison were introduced to the Belarusian side of the zone in 1996.