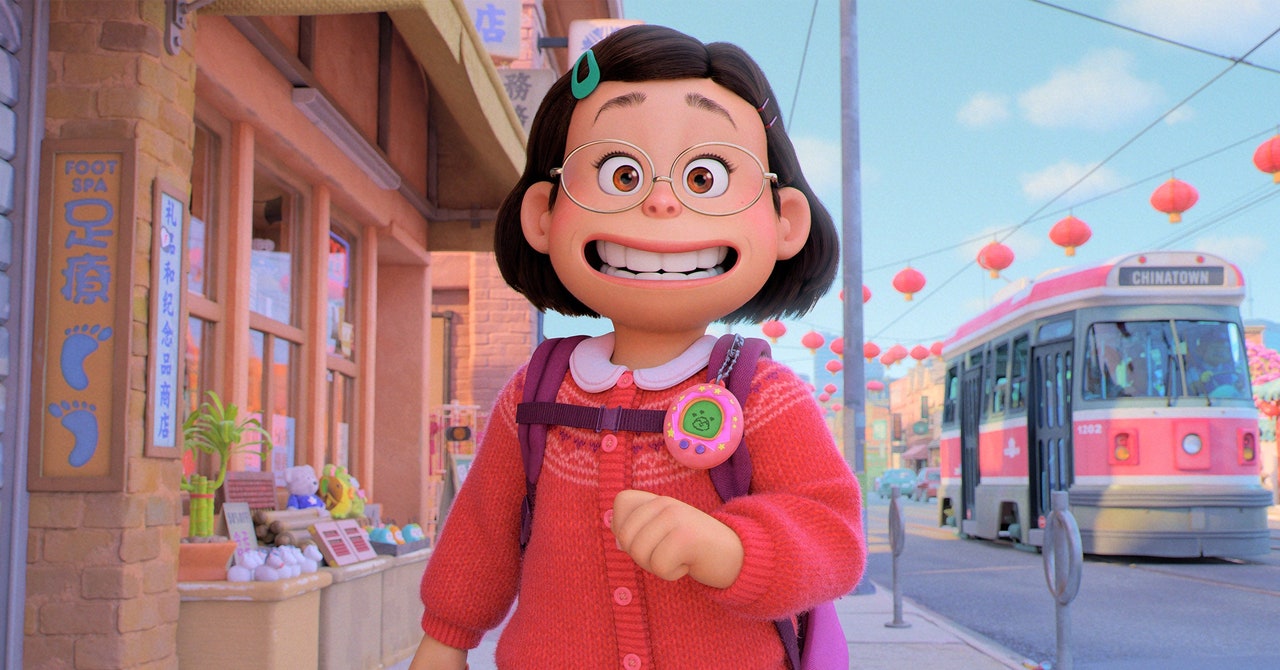 In 2017, director Domee Shi had just finished Bao, a Pixar short in which a woman’s bao bun lunch comes to life and grows from an adorable dumpling into a surly steamed-up teenager. It was an allegory for motherhood. Following the film’s warm reception (it eventually won the Oscar for Best Animated Short), her Pixar colleagues asked her to pitch ideas for a feature. She spent that summer working up three concepts—all coming-of-age stories about teenage girls that leaned heavily on her experiences growing up in a Chinese Canadian family in Toronto.

Ultimately, she made Turning Red, the story of Meilin Lee, a 13-year-old Chinese-Canadian girl growing up in Toronto in the early 2000s who wakes up one day to discover that she now transforms into a magical giant red panda whenever she gets angry or upset. It’s an allegory for puberty—and one of the most personal movies Pixar has ever made.

The studio’s moviemaking process is now part of cinematic lore. Its rules of storytelling (there are 22) are handed down in earnest screenwriting blogs like the Ten Commandments. In its early days, Pixar was notorious for polishing and tinkering and crafting—boiling a story down to its very essence, trying to speak to universal themes like love and loss and family. Each film got hashed out by Pixar’s “brain trust”—John Lasseter, Pete Docter, Brad Bird, and others—and the results snagged the studio huge hits and dozens of awards.

But those rules also meant a lot of movies looked a lot different from their original ideas. Up started life as a film about a pair of alien princes living in a floating city; A Bug’s Life was completely rewritten nine months before its release. That’s not really how Shi works. “There was no clear-cut schedule or any structure to pitching these ideas, you can kind of go at your own pace,” she says. “For me, I just want to go fast because my worst fear is to overthink and overdo and overpolish something until it loses all of its uniqueness.”

So with Turning Red, Shi broke some rules. The movie, which lands on Disney+ on Friday, is largely faithful to her initial pitch—there are scenes from her early storyboards that now exist in much the same form. There’s a moment, for instance, where Meilin’s mother goes to her daughter’s school to spy on her, peering from behind a tree with binoculars, to Meilin’s total mortification. “You could tell some of these were coming from very personal experiences from Domee, and that’s always a drug when you hear a pitch,” says producer Lindsey Collins. “That’s not something you get out of the gate normally.”

This focus on personal experiences has become something of a trend in Pixar’s recent works. Luca, which came out last year, was heavily influenced by director Enrico Casarosa’s own childhood—the impossible blues of summers on the Italian coast, the freedom and joy of exploration. Onward, although set in an urban fantasy world, was inspired by director Dan Scanlon hearing an audio clip of his father, who passed away when he was a child.

Personal experiences are also being reflected in the worlds the studio is crafting. Its early movies could be set anywhere: Toy Story and its sequels take place in the nebulous Tri-Counties Area, a vague approximation of Middle America with suburban streets and shopping malls and space-themed pizza arcades. Inside Out is about a girl whose family moves from Minnesota (home of director Pete Docter) to San Francisco—but if you swap Riley’s love of hockey out for something else, there’s little rooting the story to those places.

But 2020’s Soul, about a failing jazz musician who finds himself unwillingly in the afterlife, has New York woven throughout. Likewise, Turning Red is so linked to Shi’s life experiences that setting it anywhere but her hometown would have made it a completely different story. “I feel like Toronto and Vancouver are always pretending to be other, American cities in movies,” she says, referring to their popularity as shooting locations for Hollywood blockbusters. Setting the movie in a real place also counterbalances Shi’s anime- and manga-influenced animation style. That specificity extends to the time period of the movie—in this case, 2002. Meilin and her friends nurture Tamagotchis and obsess over 4*Town, a fictional boy band with some very catchy songs (written for the movie by Billie Eilish and her brother Finneas).