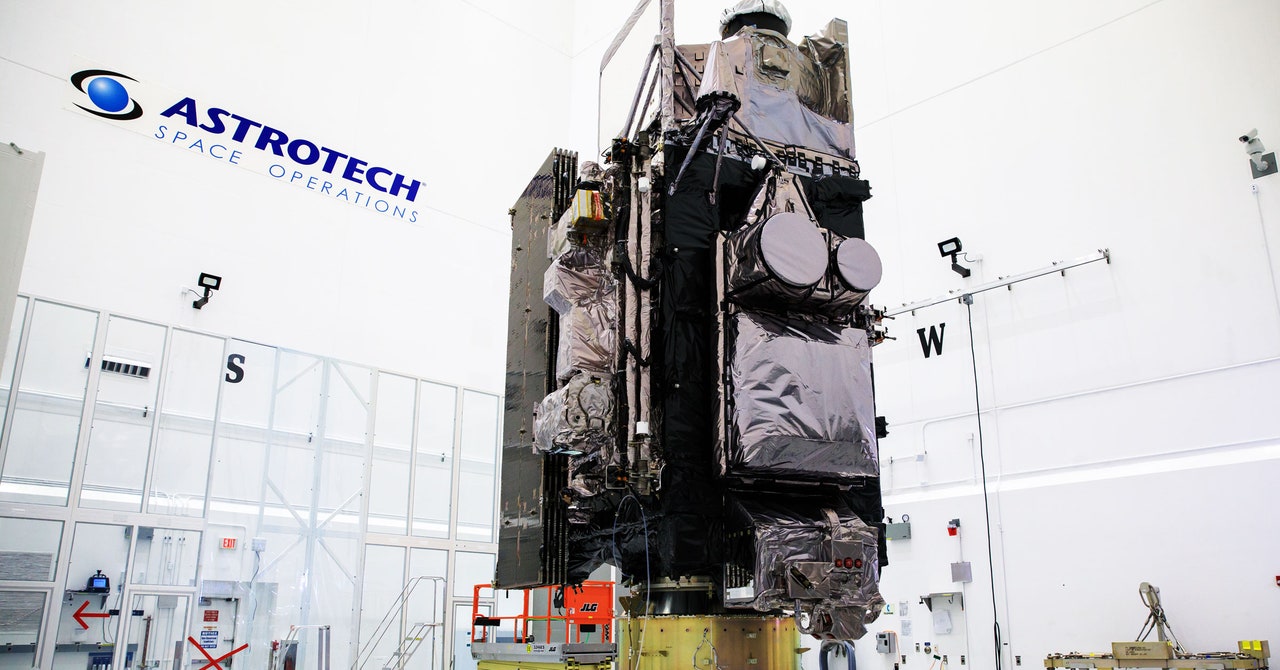 Today, the newest member of a family of storm-spotting satellites will head to space, carrying high-resolution cameras that will be used in real time to track everything from hurricanes and floods to wildfires and smoke, and even space weather. The GOES-T satellite is scheduled to blast off at 4:38 pm Eastern time—weather permitting, of course—on a United Launch Alliance Atlas V 541 rocket from Cape Canaveral in Florida.

“It’s a very all-purpose spacecraft. Basically, any kind of good or bad weather, any kind of hazardous environmental condition, the cameras on GOES-T will see them,” says Pamela Sullivan, director of the GOES-R program at the the National Atmospheric and Oceanic Administration, which together with NASA designed and built the new satellite. “The GOES satellites really help people every day, before, during and after a disaster.”

The new satellite will be part of a pair of eyes that spy on North America—one looking west and the other looking east. GOES-T will focus on the western continental US, Alaska, Hawaii, Mexico, some parts of Central America, and the Pacific Ocean. Its sibling, which has been orbiting since 2016, covers the eastern continental US, Canada, and Mexico.

NOAA has been maintaining this twin set of satellites (and sometimes, a triplet set) since the 1970s, retiring orbiters as they age and swapping new ones in. Once it’s in orbit, GOES-T will be renamed GOES-18, since it’s the 18th satellite in the program, and it will also be known as GOES-West, since it’s the west-looking eye. It will replace the satellite currently covering the west, which in 2018 developed a problem with its Advanced Baseline Imager, one of its most important instruments. A loop heat pipe system has been malfunctioning and not transferring enough heat from the electronics to the radiator. As a result, the heat has become a contaminant; at certain times, the infrared detectors become saturated, degrading their images.

The older satellite isn’t useless, though. After GOES-T takes its place, it will be put in “standby mode” and maintained as an on-orbit spare, Sullivan says. Thirteen previous satellites have been retired, while two more remain in orbit as backups. The new satellite also isn’t the last. Eventually, another satellite (GOES-U) will follow it, likely to replace the east-looking satellite, ensuring that the dynasty stretches into at least the mid-2030s.

GOES-T is an upgrade over its predecessors. It is the third member of the new generation of GOES spacecraft that come with improved versions of the Advanced Baseline Imager that can snap high-resolution photos of the entire western hemisphere every five minutes. It takes those images at 16 different spectral bands or “channels”—a red and a blue channel at visual wavelengths, and then 14 others that range from near-infrared to mid-infrared wavelengths. (Earlier GOES imagers only had five channels.) This allows researchers to pick their favorite channels to best map out wildfires, clouds, storms, smoke, dust, water vapor, ozone, and many other atmospheric phenomena.

While most satellites fly a few hundred miles above the ground in the relatively crowded low Earth orbit, looping the globe every two hours or so, GOES-T will ascend to 22,000 miles—about a tenth of the way to the moon. In this sparsely populated area known as geostationary orbit, spacecraft orbit as fast as the world turns, allowing them to remain positioned over the same spot on the globe. That key feature allows the GOES satellites to continuously monitor weather, which can change quickly. (GOES stands for Geostationary Operational Environmental Satellites.)