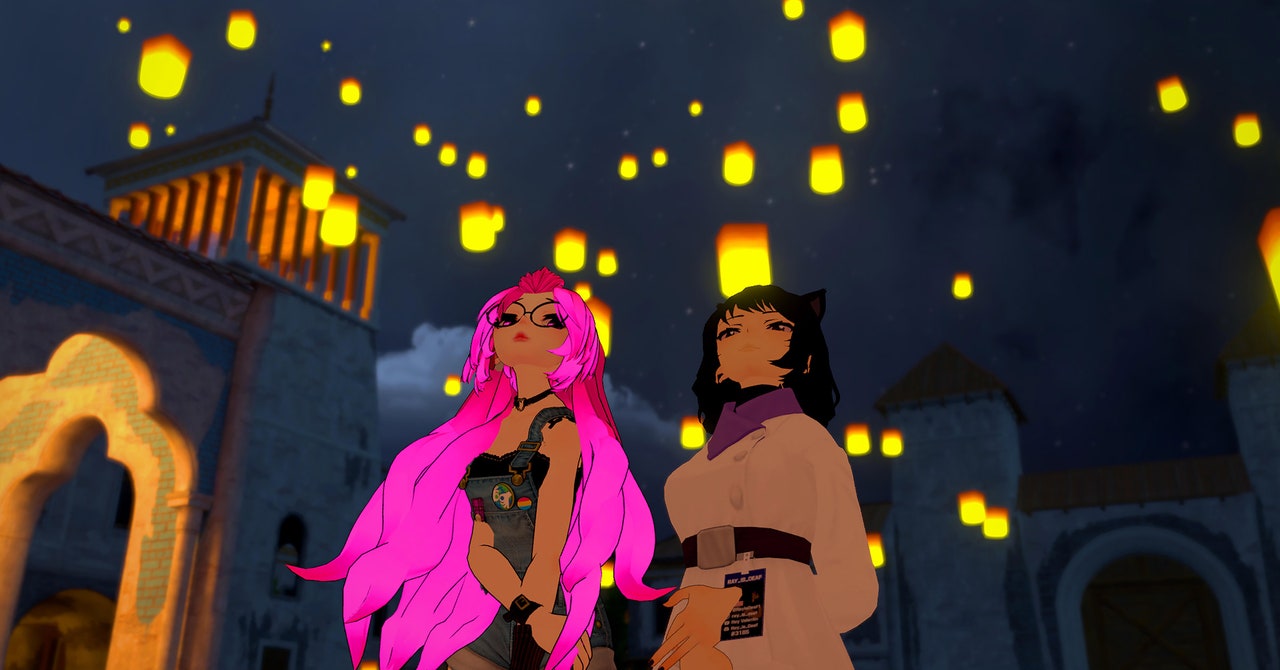 The Monitor is a weekly column devoted to everything happening in the WIRED world of culture, from movies to memes, TV to Twitter.

Joe Hunting’s camera remains steadfastly trained on his subjects. They’re lingering in and around a place called Bar Pyxis, awkwardly flirting and bumping into one another. Most are dressed in their cyberpunk finest, although a solitary sailor stands in the doorway. Many of their bodies are frozen; one looks passed out on the ground. The Covid-19 pandemic rages on all around them, but no one is in a mask. Not a protective one, at least. This party is happening in VRChat, and everything—even Hunting’s camera—is happening in the rarefied air of the metaverse.

To be certain, this isn’t the metaverse of Mark Zuckerberg’s dreams. There are meetings, but not the work kind. Some spaces look like conference rooms, but there’s no “infinite office.” This is the metaverse gamers and other extremely online people have known about for years. The organic one, the one for people who just wanted to hang out and find a place to be themselves. The one that now seems most ephemeral, like it could be swallowed by Meta at any moment.

Capturing the metaverse, mind you, is not part of Hunting’s director’s statement. His documentary, We Met in Virtual Reality, which premiered at this year’s Sundance Film Festival, isn’t a diatribe on the corporate takeover of digital spaces. Instead, it’s about showcasing the people in the small progressive communities that have built social VR into what it is. There’s Jenny, an American Sign Language teacher who is working to create a space for deaf and hard-of-hearing people in VR. There are nonbinary folks discussing the possibilities of exploring identity in virtual space. And there are two couples who, as the title suggests, met in VRChat. Their stories are similar, but not overlapping, and they provide a snapshot of the metaverse—and I’m using that term in its broadest possible definition here—as it stands on the precipice of transforming from an online outsider space to whatever it will be next.

We Met in Virtual Reality is also a glimpse into the burgeoning metaverse at a time when folks needed it most. Hunting, who shot the entire documentary inside VRChat (he used a VRCLens, a virtual camera made for this purpose), had been thinking of doing a doc about virtual spaces for a while, but it wasn’t until Covid-19 hit that he was able to focus up and do it. “I essentially lived in VR during the pandemic,” Hunting said while introducing his doc at Sundance—which, in an ironic turn, was also being held virtually because of Covid. “I captured a few stories that I felt were very telling on the ways in which we can connect online and express ourselves and find community during a time where our physical lives were a lot more limited.”

Hunting’s goal, then, was to show “what being present in VR is truly like.” And that he does. There’s no need to spoil anything here, but his movie is far from one big party. People discuss deaths in their families, struggles with addiction, and identity. If ever there was an argument for virtual reality still being reality, this is it. Hunting’s film makes the case that all those dreamers who envision a digital world that brings people together might be on to something.