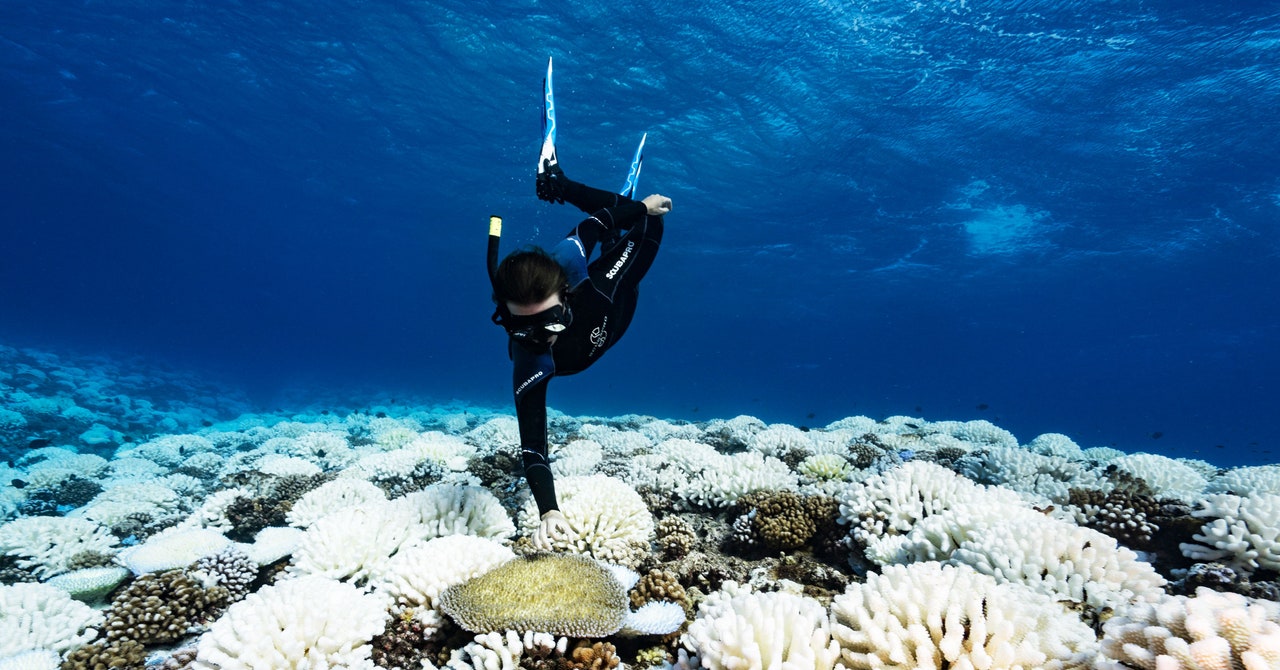 Astonishingly, however, by 2010 global coral coverage was roughly back to pre-1998 levels. “That’s good news,” says Souter. “Even though reefs got knocked down, they got back up again.” When “old growth” corals are wiped out, the new ones that move in are often faster-growing, weedier species (just as with trees after a forest fire), says Souter. It’s great to have this growth, he says, but these opportunistic corals are often more vulnerable to disease, heat, and storms.

A global decline has largely been the trend since 2010, plunging corals back below 1998 levels. That’s due in large part to two more global bleaching events, in 2010 and 2015-2017, from which corals haven’t been given enough reprieve. There has been a tiny, 2 percent uptick in live coral since 2019, though it’s too soon to say if that might continue. “If you were a really optimistic person you might say that this occurred even while temperatures are high, so maybe we’re seeing adaptation,” says Souter.

During the long, relatively stable and healthy period for corals in the 1990s and early 2000s, the average reef was about 30 percent live hard coral and 15 percent macroalgae like seaweeds and turf. That’s twice as much coral as algae. Since 2009, that ratio has slipped to about 1.5 as reef macroalgae has boomed by 20 percent. While seaweed also makes for a productive ecosystem, it’s not the same as the complex architecture made by reefs, and it supports different fish.

Encouragingly, the Coral Triangle in East Asia stands out as a bold exception. This region holds almost a third of the world’s coral reefs—and it anomalously hosts more live hard coral and less macroalgae today than in the early 1980s, despite rising water temperatures. That’s thought to be thanks to genetic diversity among the region’s 600 species of coral, which is allowing corals to adapt to warm waters. “Perhaps diversity has provided some protection,” says Souter, while a healthy population of herbivorous fish and urchins are keeping seaweeds down.

The other three main global regions for coral—the Pacific, holding more than a quarter of the global total; Australia, with 16 percent; and the Caribbean, with 10 percent—all host less coral today than when measurements started. “The Caribbean is a really tragic and desperate case,” says Voolstra, with only 50 or so species of coral and a new disease wiping them out.

It could all be worse, Souter adds. “Reefs are probably, on average, better off than I thought,” he says. “The fact that the reefs retain the ability to bounce back, that’s amazing.”

In the face of punishing conditions, coral conservationists globally are working to protect corals from pollution and to actively restore them. One recent study, led by Lisa Boström-Einarsson of James Cook University in Australia, trawled through the literature and found more than 360 coral restoration projects across 56 countries. Most are focused on transplanting bits of coral from a flourishing spot to a struggling one, or “gardening” baby corals in nurseries and planting them out. They also include innovative efforts like using electricity to prompt calcification on artificial reefs (an old but still-controversial idea), and using a diamond blade saw to slice tiny, fast-growing microfragments off slow-growing corals.